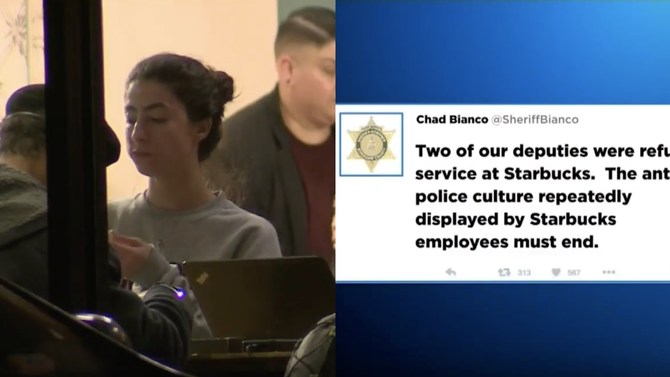 When Blue Lives Matter reached out to the department for comment, the Sheriff denied that the incident involved their deputies. However, a review of the Starbucks’ video surveillance from that night showed the two deputies in the store.

A spokesperson stated that the footage revealed a gross example of poor customer service in the busy store. However, it was not intentional snubbing of the deputies.

Starbucks released a statement saying: “There is simply no excuse for how two Riverside deputies were ignored for nearly 5 minutes at our store on Thursday evening. We are deeply sorry and reached out to apologize directly to them. We take full responsibility for any intentional or unintentional disrespect shown to law enforcement on whom we depend every day to keep our stores and communities safe. No customer, in or out of uniform, should ever have that experience at a Starbucks.” The spokesperson maintained that an investigation into the incident was still undergoing. He stated that they hoped to reach out to the affected deputies to apologize directly.

“The partners [employees] who worked that evening will not be scheduled to work while we investigate and take the appropriate steps,” the statement read.

Despite the assurances by Starbucks and the video evidence which seemed to support the company’s statement, Riverside County Sheriff Chad Bianco took to Twitter to call out the company.

The tweet read: “#StarbucksIncident We are aware of the “cop with no coffee” incident that occurred in Riverside on 12/12/19, involving our @RSO deputies. We are in communication w/ @starbucks Corporate addressing the issue of deputies being denied service. #copwithnocoffee #starbucks.”

Forty minutes later, he tweeted: “Two of our deputies were refused service at Starbucks. The anti police culture repeatedly displayed by Starbucks employees must end.” In an interview with Steve Johnson, who operates a community Facebook page, Sheriff Bianco said: “The facts are undisputed in this case. Two of our deputies went into a Starbucks in Riverside and they were ignored for a long period of time. They weren’t exactly sure how long, five minutes, 10 minutes, they think maybe it may even have been longer than that. But the bottom line, they tried to get served.”

He continued: “They asked if anyone was going to help them. They were laughed at and they were completely ignored, obviously ignored, to where other patrons knew they were being ignored.”

He stated that the deputies finally left and got their coffee somewhere else, maintaining than he commended them for their actions.

When asked what he thought about the footage and Starbucks statement about poor customer service, he replied: “They’re doing corporate damage control. They want to downplay what happened.”