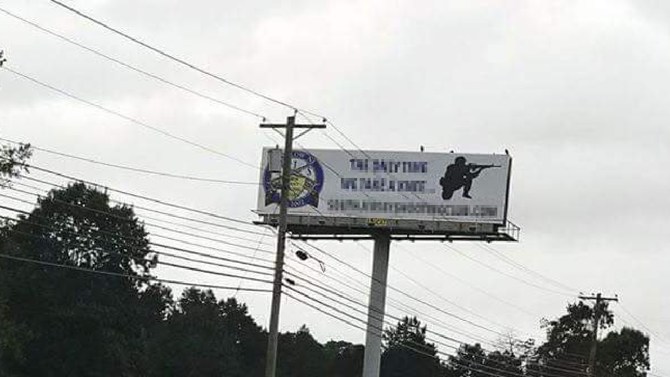 Wesley Aducat, the owner of the South Jersey Shooting Club in Camden County denies racist allegations by dozens of protesters, and is refusing to take calls to put down two of his billboards along the county road - one near Route 73 in Voorhees Township and the other one located at Routes 73 and 130 in Pennsauken.

"It has absolutely nothing to do with race," he says. "It's just support for our veterans."

The billboards both show the words: "The only time we take a knee…" and features a black silhouette of a shooter kneeling with one foot down, readily aiming with a rifle just above the shooting range’s website and contact details.

The signs appear to be a jab at the rising racial tensions between public mocking of NFL players taking a knee during the playing of the national anthem, where Aducat mentions that he does support the right to protest, but disagrees with the action of kneeling during the national anthem. He says his concern is mostly because the members of the club are veterans, and does not plan on taking down the signs anytime soon.

This action from Aducat, however, had greatly upset the members of NAACP's Camden County East chapter, stating that his signage could cause a rift aimed towards the people of colors’ systemic racism and police brutality issues, and twists the message that was originally used to represent the kneeling action by the state.

NAACP member Keith Benson Sr. also states: "We're talking about police murdering unarmed black people,"and claims the billboards are encouraging division between the races and encouraged their members to complain. "They deserve all the disrespect they're going to get as a result of putting it up. But they probably thought they were clever. They probably thought they were strong, patriotic Americans."

"We're living in a very difficult time right now. People are trying to stand up for black and brown people to say, 'Hey this is not right,'" South Jersey Women for Progressive Change’s Susan Druckenbrod said. "That sign really is just mocking the idea of taking a knee."