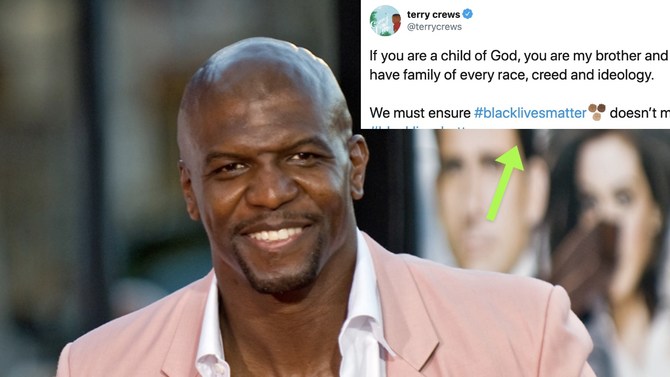 Brooklyn Nine-Nine star Terry Crews is once again under fire after he posted another controversial Black Lives Matter tweet.

He tweeted: "If you are a child of God, you are my brother and sister. I have family of every race, creed and ideology. We must ensure #blacklivesmatter doesn't morph into #blacklivesbetter."

These new tweets echo his previous controversial tweet, in which he stated: "Defeating White supremacy without White people creates Black supremacy. Equality is the truth. Like it or not, we are all in this together."

Among those who called out Crews was actress Holly Robinson Peete, who wrote: "Terry we trying to 'matter' and get to 'equal' and you are worried about better?? Another sleepless night thinking about #ElijahMcClain and I woke up worrying about how to prevent my sweet special son from meeting a similar fate and you woke up worried about *checks tweet again*... #blacklivesBETTER??"

"We are aiming for equal! going back to sleep," she added.

Amanda Seales, former cohost of The Real, stated that Crews' words were "unintellectual and irresponsible,” adding, “You are developing into an enemy of the people. Ignorance will be your downfall." She added: "#BlackLivesMatter is, in part, a rallying cry and a protest slogan to galvanize people into doing the justice work needed to derail the deaths, dehumanization and destruction of Black lives that racism causes. Justice is not a competition."

Journalist and CNN commentator Keith Boykin wrote: "In 1883, the Supreme Court claimed that a Civil Rights Act would make Black people ‘the special favorite of the laws.’  In 2020, Terry Crews warned that #BlackLivesMatter will morph into #blacklivesbetter.  Demanding Black equality is not Black supremacy." Crews has yet to respond to the backlash. Last time, he responded to comedian Godfrey, who had written, "Black pride isn't anti white."

Crews responded: "I agree. I'm not discussing white people here. There are 'gatekeepers of Blackness' within our own community who decide who's Black and who's not. I have often been called out for not being 'Black enough.' How can that be?"