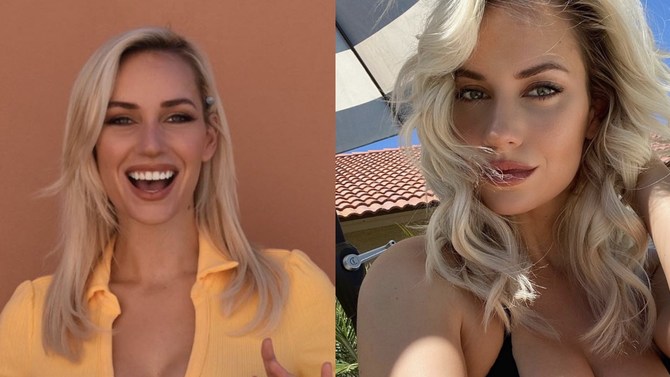 American golfer Paige Spiranac revealed that has been accused of “ruining the game” because of wearing low-cut tank tops that flaunt her cleavage.

The 26-year-old hosts the Playing A Round podcast, and complained in a recent episode about how she is treated because of what she wears and how she looks.

She claimed that she had been called a “sl**” and a “w****” because of the tank tops, and that it has even cost her opportunities to work with charities. News.com.au reported that Spiranac stated that gold was full of “hypocrisy,” because everyone “is just playing this part of this perfect golfer when in reality it’s nothing like that.” She maintained that she is looked down upon because of the skintight outfits she chooses to wear.

However, her outfits have not disqualified her from playing. She played at San Diego State University and University of Arizona, and during two seasons, won All-Mountain West Conference honors. She has also gained sponsorship deals because of her success and social media following.

However, she has lost out on other opportunities. Recently, she was denied the opportunity to volunteer with a charity that provided kids with free golf clubs.

She said, “The guy wrote back and said, ‘We would love to but, because of the way our board members view you, you can’t help out.'”

She continued: “I want to give back to these kids who don’t have anything, because I grew up not having anything, and I can’t even f***ing do that because of my cleavage. We bond over having a common interest and we all love the same thing… I don’t understand why it matters if you’re wearing a polo (shirt) and I’m not wearing a polo. If a guy on tour wears shorts instead of pants, the world’s not going to end. In golf, people make all of these problems so serious and it’s not serious.” “It’s like my whole life I’m trying to find a place where I can fit in and that I feel comfortable and that I feel at peace with myself and I haven’t found that. Golf is the absolute worst place for me to be because I am the exact opposite of everything that a golfer should encompass, should be, and I’m not. I’m not refined, I’m raw and real and I wear what I want and I have always been so different and golf is not that way,” Spiranac stated.