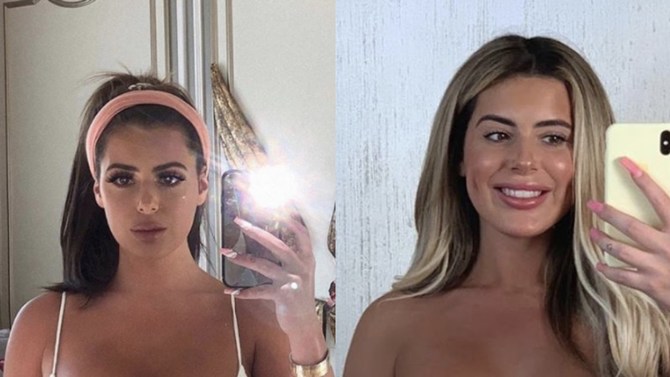 23-year-old Brielle Biermann was in a figure-flattering white bikini as she posed in her posh grey bedroom. The two-piece bikini showcased her hourglass figure, and in her hand was a bottle of a self-tanning cream.

She gushed about the product to her 1.3 million followers, writing: “Feeling confident and back to myself again after using my go to self tanner @lovingtanofficial! Loving tan is long lasting, easy to apply & gives you a natural glow.”

Not one to let a marketing opportunity pass by, her mother – Kim Zolciak, commented on the post: “Looking good baby! @saltykswim @lovingtanofficial look great together!”

Zolciak is set to debut her swimwear line – Salty K Swim – on June 1. Brielle also modeled the bikini line last week, posting a picture of her sitting by the pool.

This post came after her 18-year-old sister, Ariana Biermann, also modeled a pink suit from her mother’s swimwear line.

Brielle’s post showed her sitting on the edge of a swimming pool, her feet dangling in the water. She was wearing mirrored glasses, looking straight into the camera.

In her post, Ariana wore her hair long, and also showed her long nails. On her part, Kim modeled a skimpy swimsuit last month on Instagram.

Kim has been upfront about her cosmetic enhancements, and in 2017, told E! News that she had had some work done on her midsection and breasts. She stated that she would do more work in the future: “I will always nip and tuck if I feel the need to do so.”

However, she has denied having any work done to her face. Speaking about the rumors that she had her face cosmetically enhanced, she told Andy Cohen in August 2015: “I hear you, and I hear this all the time, but I want people to understand. I had a baby in 2011, one in '12 and two in 2013. So I think the weight of all that...but I mean, no, I haven't.”

She was also slammed for posting photos where her thighs looked almost impossibly slim. She told E! News: “I had a boob job and I’ve had a hernia fixed. I had a pretty big hernia from the twins, so I said just do a tummy tuck, which is kinda the same thing, just make the skin really tight. But that doesn’t change my size. I’m the same size I was the day I walked into surgery, I’m just a little bit tighter-looking.”

She also stated that she doesn’t eat much. “I don’t eat tons at a meal. I love dessert, not gonna lie, definitely have dessert every night. Just a little brownie, not a big sundae. I think eating in moderation is key for people. I think the portion sizes that are out there today are just insane,” she said.