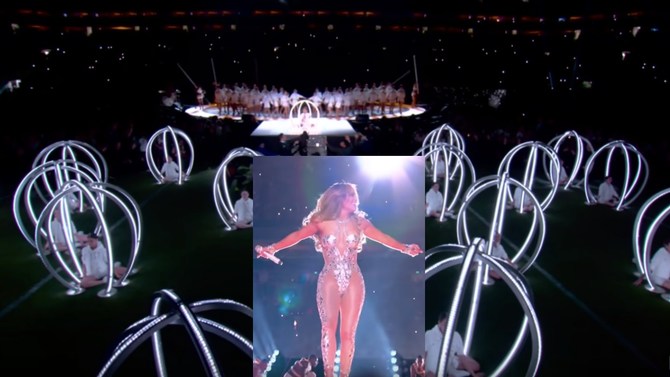 Jennifer Lopez and Shakira’s Superbowl LIV halftime show sparked controversy, but many seemed to have missed the political message embedded in the performance.

As the 15-minute performance drew to a close, Lopez’s 11-year-old daughter, Emme Maribel Muñiz, sang the ballad version of “Let’s Get Loud.” She was in a lit cage-like dome during the performance.

Behind her were other girls dancing, and 18 more girls sat in their own illuminated cages. 50-year-old Lopez then joined her daughter on stage, and the two sang a version of Bruce Springsteen’s 1984 “Born in the USA” protest anthem as 43-year-old Shakira played the drums.

Many took to social media to commend the powerful display of “Latinx” girl power, with many praising the inclusion of the cages on the show.

Tom Moore, a self-described “liberal contrarian,” gave “props” to the two female pop stars “and/or the choreographer for the necessary statement with Latino children in cages singing ‘Born in the USA.'” Iyam, a bi and an intersectional feminist tweeted: “HOW IS NO ONE TALKING ABOUT THIS POWERFUL YET SUBTLE STATEMENT?”

Writer Kelly J. Cooper stated that she was “impressed” by the entire performance, and she saw it as a “gigantic F— YOU to Trump & the Republicans.”

Erika Andoila, an illegal immigrant and feminist immigration activist, capitalized on the moment, reminding Americans that while Trump signed an executive order to end family separations in June 2019, the injustice was still far from eradication.

Others stated that the performance also highlighted Trump’s poor handling of the devastations that Puerto Rico suffered after the 2017 hurricanes.

Vanity Fair’s Erin Vanderhoof stated that the performance was “surprisingly political,” adding that the cages were “a possible nod to the thousands of children, most from Latin American countries, who have been detained at the border.” She also predicted that the Roc Nation deal with NFL meant that “the subtle references to politics might serve as a guide for what the NFL will be like in the Jay Z era.”

For Conservative Super Bowl fans, the focus was more on the duo’s performance which included crotch exposure, booty shaking, and stripper poles.

Daily Wire’s Matt Walsh tweeted: “This should be a family event. Maybe the 50 year old women can strip on their own time, not during the game.”

He was later accused of racial bias against the Latinas, and one person accused him of being offended by the duo’s “Latin Zest & energy.” Walsh, in a later tweet, stated that complaining about halftime shows that were “inappropriate” was a longstanding conservative tradition.