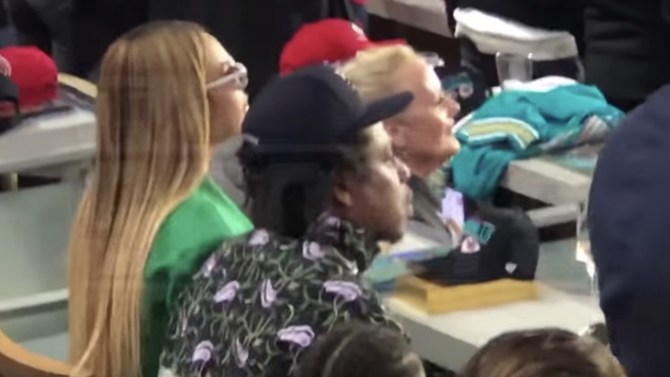 Jay-Z’s lucrative deal with the NFL, a league dedicated to promoting patriotism, did not seem to stop him from remaining seated as the national anthem was sung during the Super Bowl. Seated next to him was his wife Beyoncé.

As others stood up when Demi Lovato started singing, the Carters remained firmly rooted in their seats. This came just a day after The New York Times published an interview with Jay-Z, in which he had strongly defended the deal between Roc Nation and NFL. The deal has its share of critics, including Eric Reid, a safety for the Carolina Panthers who, together with former San Francisco 49ers quarterback Colin Kaepernick, filed a lawsuit against the NFL.

According to The Times, the deal “gives Jay-Z influence over the league’s most important music events, including the halftime show.” Shakira, who performed at the Super Bowl Halftime Show, is a client of Roc Nation.

Jay-Z addressed the criticism he had received, stating, “As long as real people are being hurt and marginalized and losing family members, then yes, I can take a couple rounds of negative press.”

Speaking about the NFL and Colin Kaepernick, he said, “No one is saying he hasn’t been done wrong. He was done wrong. I would understand if it was three months ago. But it was three years ago and someone needs to say, ‘What do we do now — because people are still dying?’ We are two adult men who disagree on the tactic but are marching for the same cause.”

The Carters’ behavior was a far cry from Beyoncé’s 2013 national anthem performance, where she asked the audience at a press conference to stand up before she sang. The Washington Post report read: “… the superstar began with an unusual request of reporters: ‘Would you guys mind standing?’ And then she sang the National Anthem — live, unaccompanied, and loud. ‘Any questions?’ she asked.”

This came a week after she had received backlash for lip syncing the national anthem during Barrack Obama’s inauguration on January 21, 2013.

As she presented Kaepernick with the Muhammad Ali Legacy Award at the annual Sports Illustrated Sportsperson of the Year Awards ceremony in December 2017, Beyoncé stated: “It feels so good to be here on such a special night of appreciation. Thank you, Colin Kaepernick. Thank you for your selfless heart and your conviction. Thank you for your personal sacrifice. Colin took action with no fear of consequence or repercussion — only hoped to change the world for the better, to change perception, to change the way we treated each other, especially people of color. We are still waiting for the world to catch up. It’s been said that racism is so American, that when we protest racism, some assume we are protesting America. So, let’s be very clear: Colin has always been very respectful of the individuals who selflessly serve and protect our country and our communities and our families. His message is solely focused on social injustice for historically disenfranchised people. Let’s not get that mistaken.”