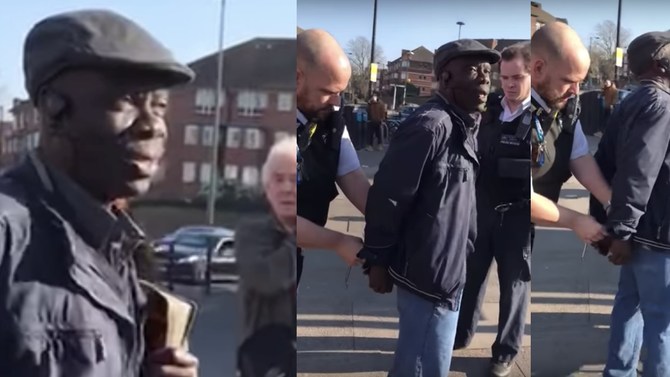 64-year-old Oluwole Ilesanmi was preaching outside North London’s Southgate Tube station when he was approached by two law enforcement officers. He was informed that a passer-by had complained to the station about Ilesanmi’s hate speech.

He admitted that he had called Islam an “aberration,” but that he was expressing his Christian views, not denigrating Islam.

One of the officers told him that he was disturbing the peace, “No one wants to hear that. They want you to go away.”

A video taken by a by-stander shows his Bible being taken away by an officer, and one officer states: “You should’ve thought about that before being racist.” He was then arrested and put into the police car.

After he was driven miles from the station, the officers let him go. He had no money on him, and had to rely on the kindness of a stranger to get back.

Ilesanmi will receive £2,500 from Scotland Yard as compensation for wrongful arrest and the humiliation and distress he suffered because of the arrest.

He told The Mail: “I believe God loves everyone, including Muslims, but I have the right to say I that I don’t agree with Islam – we are living in a Christian country, after all. I was upset when they took away my Bible. They just threw it in the police car. They would never have done that if it had been the Koran. Whatever happened to freedom of speech?”

Andrea Williams, chief executive of the Christian Legal Centre, commented on the incident: “Despite laws that theoretically support the freedom to preach in public, in practice police officers are quick to silence preachers at the first suggestion that a member of the public is offended.”

A Met Police spokesman stated: “The Met respects and upholds the rights of all individuals to practice freedom of speech, and this includes street preachers of all religions and backgrounds. However, if the language someone uses is perceived as being a potential hate crime, it is only right that we investigate. In this case, it was deemed appropriate to remove the man from the area.”

Ambrosine Shitrit recorded the debate between Ilesanmi and a Muslim man who started acting aggressively.

She stated: “The preacher was fearless, but if I hadn’t started filming he would have been attacked. He was not breaching the peace and in no way had he been Islamophobic. I would’ve been the first person to have said something if he had been.”

The video has over 10 million views.