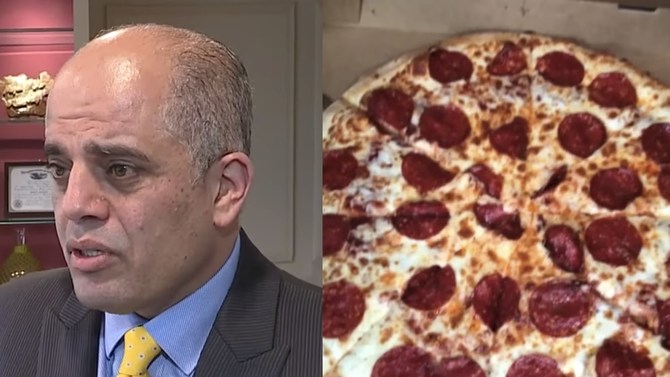 In Dearborn, Mohamad Bazzi has filed a suit against the Little Caesars outlet which he claims sold him pizza containing pork even though it was advertised as “halal.”

The multi-million dollar suit alleges that Bazzi ordered a “halal” pizza on March 20, and fully believed that the product met the Islamic food consumption standards.

Bazzi alleges that the pizza he received from the store and consumed contained pork, which is not considered halal according to Islamic law.

According to Bazzi’s lawyer, this sale violated the “Wayne County Halal and Kosher Anti-Fraud and Truth-In-Labeling Ordinance.” He added that people had a right to know about the “fraud that is being perpetrated in Dearborn, Michigan, the community with the highest concentrations of Muslims in North America.”

The suit states that the window of the Little Caesars has a “Halal Pepperoni” sign which would have people believe the halal pizzas sold at the store did not contain pork.

According to court documents, Bazzi went home with the pizza, which he shared with his wife. After taking a couple of bites, he realized that the pepperoni was indeed pork, and not any other meat that was considered halal.

The suit alleges that the couple became sick after they realized that they had eaten pork.

Bazzi then went to the Dearborn Police Department on March 23 and filed a complaint.

He later returned to the same Little Caesar’s pizza outlet on May 24 and placed an order for a halal pepperoni pizza.

He documented the purchase, taking photos of the “halal” sticker on the box. When he opened the box, he found that it was yet another pork pepperoni pizza, and not halal pepperoni.

He went back to the shop and asked to talk to the store manager, who allegedly confirmed that the pizza was pork. The suit further alleges that the manager maintained that Bazzi ordered a regular pepperoni pizza and then requested that a “halal” sticker be put on the box.

“You told her to put the sticker on there, I have no idea, I'm like no, we only take orders because it was your order and you said you wanted a pepperoni, so we said OK,” the store manager stated, according to court documents.

The suit further alleges that the manager claimed Bazzi was given the pizza that he had ordered.

The suit is seeking $100 million in damages for the “irreparable harm” caused to Bazzi and the thousands of others who ordered halal pizzas, believing that they were allowable under Islamic dietary laws.

Little Caesars has yet to release a statement regarding the suit.