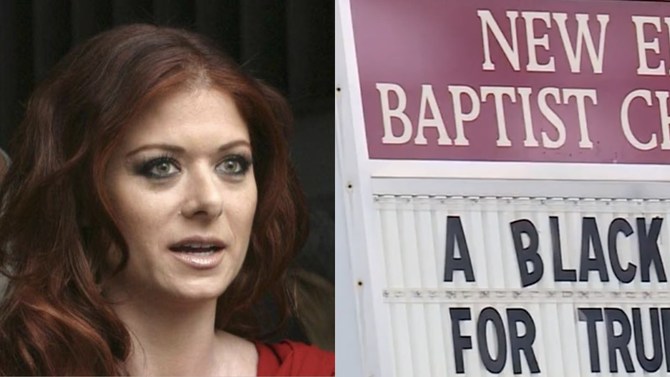 On Saturday, the 51-year-old Will & Grace star tweeted “THANK YOU #Alabama” in response to a sign in a Birmingham Baptist Church which read: “A black vote for Trump is mental illness.”

The sign outside the New Era Baptist church also featured the message “A white vote for Trump is pure racism” on the other side.

The pastor of the church, Michael Jordan, told WZDX that he made the sign as a way of encouraging people to vote for anyone other than Trump in next year’s ballot.

However, this message did not sit right with some people. A local Trump supporter, Daxton Kirk, stated that people “should not be able to come into a building and feel like you are hated or diversified just because you came here to worship the Lord.”

Kirk contacted the City Hall to see if the officials could do anything about the sign.

Some Twitter users criticized Messing for making the comment, with one stating: “Sorry Debra...my world view doesn't break down into Black vs White. It breaks down into those who support ripping babies apart in their mother's womb and those who don't. I vote to protect babies of all colors. Period.”

@mrjavahead stated: “I had no idea Hollywood still harbored this level of prejudice against people of color. Disgusting.”

The day before this controversial tweet, Messing had expressed anger about a Beverly Hills fundraiser held for Trump. She called for the list of attendees to be made public.

According to The Hollywood Reporter, the fundraiser tickets were going for $1,000 to $10,000 for a VIP reception.

Debra Messing and her 'Will & Grace' co-star Eric McCormack were vocal about their issues with the fundraiser.

On Saturday, Messing tweeted: “Please print a list of all attendees please. The public has a right to know,” and included a link to the Hollywood Reporter article.

McCormack’s tweet read: “Hey, @THR, Kindly report on everyone attending this event, so the rest of us can be clear about who we don’t wanna work with. Thx.”

Messing is open about her political views, but one tweet shared after the El Paso shooting landed her in trouble. She retweeted this: “If I get killed in a mass shooting please cremate me and throw my ashes into Mitch McConnell’s and Dana Loesch’s eyes while I’m still smoldering,” captioning: “THIS. Yessssssss.”

She was harshly criticized for advocating for violence, with many fans of the show stating that they were disappointed that she would sink that low.