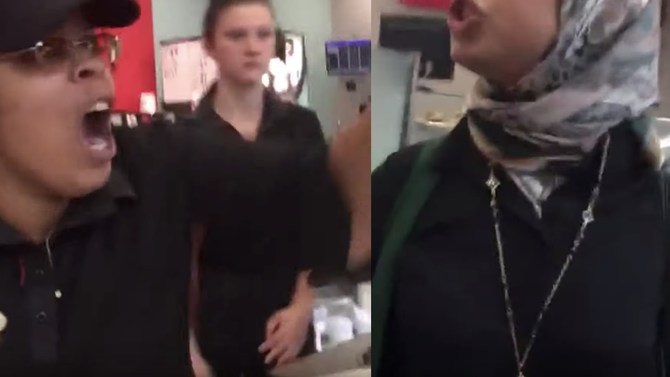 It was earlier reported that a Muslim-American couple stopped at the Tim Hortons at 760 S. Hewitt Road, Ypsilanti Township while on their to Mackinac Island.

According to the couple who were identified as Ameur Dhaimini and Alaa Kouider, they ordered a blended frozen coffee drink and a coffee with cream from the drive-thru, but the clerk made a mistake and got their order wrong.

When they decided to have it corrected and went inside the store, they were met with resentment. Based on the complaint, one of Tim Hortons employees declined to help the couple or to even contact a manager, at which time Dhaimini started recording the whole situation.

When things began to heat up, the two decided to leave the store.

“After my husband was trying to leave, she said ‘yeah, go back to your country,’ then she called me the b-word,” Kouider stated.

The complaint also claims that the clerk thrust Kouider's hands forward, causing Kouider to be hit on the nose.

“I never received any call from them... until yesterday evening, I received my first phone call,” Kouider said in a statement.

According to her, the company offered her an apology and a free coffee gift card, which she politely declined.

“She did mention that the employee was terminated,” Kouider explained.

“This is something bigger ... this is something that everyone in America is suffering from ... whether we are immigrants or legal or illegal, it’s none of their business. I don’t have to walk around with my birth certificate hung on me,” she added.

In response to the event, Tim Hortons corporate media relations issued a statement:

“We always want team members and guests to have a positive, welcoming and rewarding experience at our restaurants. Franchisees are independent and responsible for all employment matters. The team member involved in this incident has been terminated by the franchise as Tim Hortons does not tolerate any type of harassment in the workplace.”